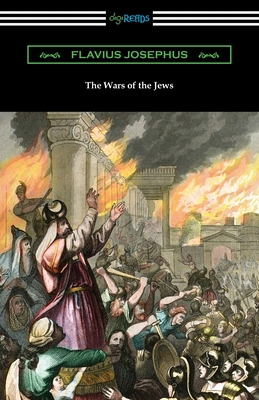 The Wars of the Jews (Paperback)

Written in 75 AD by the Jewish historian and Roman citizen Titus Flavius Josephus, "The Wars of the Jews", describes Jewish history from the capture of Jerusalem in 164 BC. to the destruction of the city in 70 AD. Josephus, born in Jerusalem in 37 AD with the name Yosef ben Matityahu, was from a Jewish family with a father of a priestly heritage and a mother who claimed to have royal blood. Josephus fought against the Romans in the First Jewish-Roman War and was eventually taken prisoner by the Romans and made a slave of the Roman leader Vespasian. When Vespasian later became emperor, he granted Josephus his freedom and Josephus became a Roman citizen. His uniquely blended history allows for an interesting perspective in "The Wars of the Jews". Beginning with Antiochus IV Epiphanes, a Seleucid ruler who captured Jerusalem, and going through the revolts against the Roman Empire, to the events of the First Jewish-Roman War in which Jerusalem was razed, Josephus offers a fascinating first-hand account of an important time in the history of Judaism. This edition is printed on premium acid-free paper.