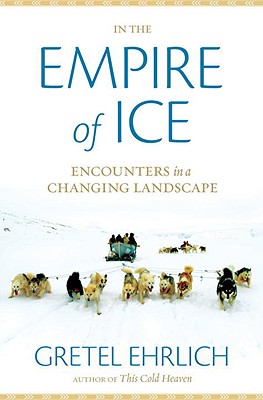 In the Empire of Ice: Encounters in a Changing Landscape (Hardcover)

In this gripping circumnavigation of the Arctic Circle, Gretel Ehrlich paints a vivid portrait of the indigenous cultures that inhabit the starkly beautiful boreal landscape surrounding the Arctic Ocean, an ice-bound wilderness that includes northern Siberia, northwestern Greenland, Canada’s vast Nunavut, and northern Alaska. Ehrlich’s expedition, supported by the National Geographic Society, documents what remains of these cultures, specifically the similarities and differences among them, including hunting traditions, shamanic and ceremonial practices, languages and legends—the ways in which they have survived, or have been assimilated, and how they are adapting to the impact of climate change on their ice-age cultures.

Ehrlich is fascinated by what she calls the ecology of culture—the ways in which the human presence of indigenous Arctic people is intricately interwoven with land, rock, river, sea, and ice. Depicting human-caused climate change as only the latest and most destructive of the ills and abuses first peoples have been suffering for 250 years, Ehrlich’s haunting and lovely prose portrays ancient tribes and traditions on the edge of extinction and captures the austere beauty of their various lifeways in the frozen dreamscape of the world they have always known.

Gretel Ehrlich is well known for her prize-winning essays, fiction, and poetry. Her acclaimed 2002 book "This Cold Heaven: Seven Seasons in Greenland" chronicled the first years of a lasting fascination with the high latitudes. Her work has also appeared in many anthologies including: "Best Essays of the Century, Best American Essays, " and "Best Travel Writing."

“In her third and most wrenching ice chronicle…Ehrlich reports on her recent National Geographic Expeditions circumpolar journey within a mosaic containing shards of the grim history of the conquest of the Arctic, empathic portraits of indigenous people, scientific findings, and personal reflections…Ehrlich makes it crystal clear why the demise of Arctic culture will affect us all in this deeply knowledgeable and beautifully composed elegy to a “ruined paradise.”
–Booklist Starred Review