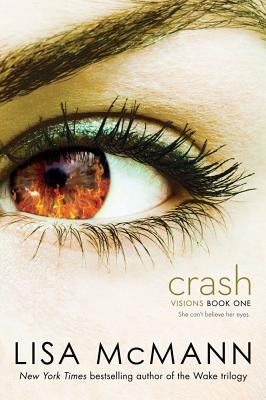 “The term 'page-turner' does not even begin to describe this latest book from McMann! From the moment readers meet Jules and begin to get a glimpse inside her life -- a life without friends, spent working in her parent's pizza shop, and with a recurring vision of the death of her estranged best friend -- they'll be hooked. Jules is a flawed character in all of the best ways, and McMann has created a plot that will have the reader flipping pages faster and faster to find out what happens next. An excellent start to a new series!”
— Amanda Snow, Hooray for Books!, Alexandria, VA

If what you see is what you get, Jules is in serious trouble. The suspenseful first in a series from the New York Times bestselling author of the Wake trilogy.

Jules lives with her family above their restaurant, which means she smells like pizza most of the time and drives their double-meatball-shaped food truck to school. It’s not a recipe for popularity, but she can handle that.

What she can’t handle is the recurring vision that haunts her. Over and over, Jules sees a careening truck hit a building and explode...and nine body bags in the snow.

The vision is everywhere—on billboards, television screens, windows—and she’s the only one who sees it. And the more she sees it, the more she sees. The vision is giving her clues, and soon Jules knows what she has to do. Because now she can see the face in one of the body bags, and it’s someone she knows. Someone she has been in love with for as long as she can remember.

In this riveting start to a gripping series from New York Times bestselling author Lisa McMann, Jules has to act—and act fast—to keep her vision from becoming reality.
Lisa McMann lives in Arizona. She is married to fellow writer and musician, Matt McMann, and they have two adult children. Her son is an artist named Kilian McMann and her daughter is an actor, Kennedy McMann. Lisa is the New York Times bestselling author of over two dozen books for young adults and children. So far she has written in genres including paranormal, realistic, dystopian, and fantasy. Some of her most well-known books are The Unwanteds series for middle grade readers and the Wake trilogy for young adults. Check out Lisa's website at LisaMcMann.com, learn more about The Unwanteds Series at UnwantedsSeries.com, and be sure to say hi on Instagram or Twitter (@Lisa_McMann), or Facebook (Facebook.com/McMannFan).