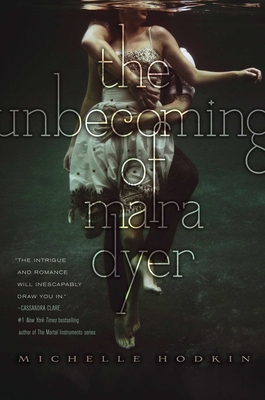 The Unbecoming of Mara Dyer (The Mara Dyer Trilogy #1) (Paperback)

This is book number 1 in the The Mara Dyer Trilogy series.

Mara Dyer doesn’t know if she is crazy or haunted—all she knows is that everyone around her is dying in this suspenseful and “strong, inventive tale” (Kirkus Reviews).

Mara Dyer doesn’t think life can get any stranger than waking up in a hospital with no memory of how she got there.
It can.
She believes there must be more to the accident she can’t remember that killed her friends and left her mysteriously unharmed.
There is.
She doesn’t believe that after everything she’s been through, she can fall in love.
She’s wrong.

After Mara survives the traumatizing accident at the old asylum, it makes sense that she has issues. She lost her best friend, her boyfriend, and her boyfriend’s sister, and as if that weren’t enough to cope with, her family moves to a new state in order to give her a fresh start. But that fresh start is quickly filled with hallucinations—or are they premonitions?—and then corpses, and the boundary between reality and nightmare is wavering. At school, there’s Noah, a devastatingly handsome charmer who seems determined to help Mara piece together what’s real, what’s imagined—and what’s very, very dangerous.

This fast-paced psychological—or is it paranormal?—thriller will leave you breathless for its sequel, The Evolution of Mara Dyer.
Michelle Hodkin grew up in Florida, went to college in New York, and studied law in Michigan. She is the author of the Mara Dyer and Noah Shaw trilogies. Visit her online at MichelleHodkin.com.