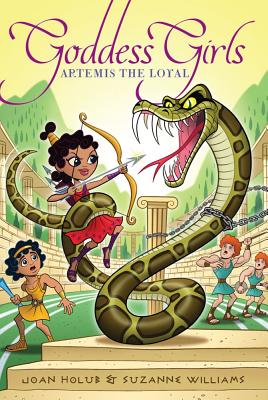 This is book number 7 in the Goddess Girls series.

It's time for the annual Olympic Games, and the four goddessgirls are not happy! It's boys only--and the girls at MOA are not pleased.

Led by Artemis, Athena, Persphone and Aphrodite, the ladies of Mount Olympus hatch a plan to get Zeus to open up the games to everyone. Will they succeed--or end up watching from the sidelines again?

These classic myths from the Greek pantheon are given a modern twist that contemporary tweens can relate to, from dealing with bullies like Medusa to a first crush on an unlikely boy. Goddess Girls follows four goddesses-in-training – Athena, Persephone, Aphrodite, and Artemis – as they navigate the ins and outs of divine social life at Mount Olympus Academy, where the most priviledged gods and goddesses of the Greek pantheon hone their mythical skills.
Joan Holub has authored and/or illustrated over 140 children’s books, including the Goddess Girls series, the Heroes in Training series, the New York Times bestselling picture book Mighty Dads (illustrated by James Dean), and Little Red Writing (illustrated by Melissa Sweet). She lives in North Carolina and is online at JoanHolub.com.