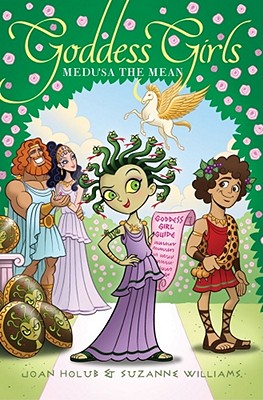 This is book number 8 in the Goddess Girls series.

Medusa is the ultimate mean girl in this series that blends modern drama with ancient myths.

Well researched and true to the original myths, each volume in the Goddess Girls series addresses contemporary issues, like friendships and relationships, from a classically accurate—and entertaining—perspective.

In Medusa the Mean, Medusa is sick and tired of being the only mortal at Mount Olympus Academy. Not only is she surrounded by beautiful, powerful, immortal classmates, but she also has snakes for hair and a reputation for being mean. Immortality, she thinks, will solve everything. So when she finds out about a necklace that promises just that, she’s sure it will help her get the two things she covets most: to be as popular as the four Goddess Girls and to have her supercrush, Poseidon, finally notice her. But when the necklace brings about popularity in the totally wrong way, things go from bad to worse. Can Medusa overcome her “meanie” status and prove that there’s more to her that meets the eye?
Joan Holub has authored and/or illustrated over 140 children’s books, including the Goddess Girls series, the Heroes in Training series, the New York Times bestselling picture book Mighty Dads (illustrated by James Dean), and Little Red Writing (illustrated by Melissa Sweet). She lives in North Carolina and is online at JoanHolub.com.