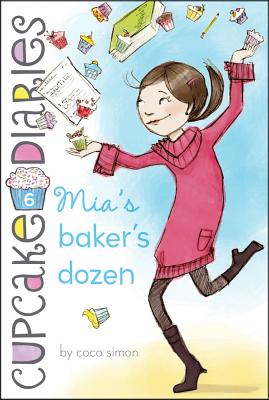 This is book number 6 in the Cupcake Diaries series.

Mia finds that one more in the mix is always better in this treat of a tween series!

Mia is getting used to her new family now that her mom is remarried to Eddie and she’s gained a new stepbrother, Dan. She’s in the groove of going to her dad’s house on the weekends, and everything is going pretty well at home and at school. Well, except for Spanish class. Mia’s parents and stepfather speak it and she does too—but speaking it and writing it are two different things, and somehow Mia ends up in the hands of the merciless Mrs. Alvarez and almost failing Spanish class. Still, things are so good at home that Mia doesn’t want to worry anyone or rock the boat. But when her parents find out—all three of them—she realizes that instead of having two parents, she’s lucky enough to have three, and all three of them pitch in to help her. A baker’s dozen is a bonus!
From cupcakes to ice cream and donuts! Having written over thirty books about middle school girls and cupcakes and ice cream, Coco Simon decided it was time for a change; so she’s switched her focus to her third favorite sweet treat: donuts! When she’s not daydreaming about yummy snacks, Coco edits children’s books and has written close to one hundred books for children, tweens, and young adults, which is a lot less than the number of cupcakes, ice cream cones, and donuts she’s eaten. She is the author of the Cupcake Diaries, the Sprinkle Sundays, and the Donut Dreams series.