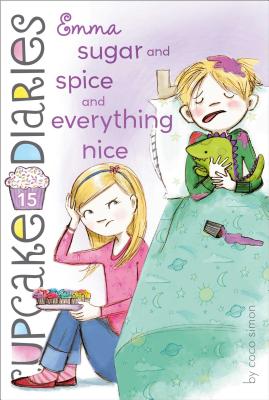 Emma Sugar and Spice and Everything Nice (Cupcake Diaries #15) (Paperback)

This is book number 15 in the Cupcake Diaries series.

Emma puts her big sister skills—and her bravery—to the test when her brother has to stay in the hospital.

Emma’s younger brother Jake has been getting sore throats for quite a while. When her parents take him to the doctor, their suspicions are confirmed: Jake needs to get his tonsils out. The Cupcake Club rallies around Jake, and even bakes him a special batch of cupcakes to make him feel better. Emma feels bad for him, but wants to stay as far away from hospitals as possible—she’s a bit squeamish and gets woozy at the sight of blood. But Jake throws a fit the day of his operation and says he only wants “Emmy” to stay with him. Emma’s mom tells her she doesn’t have to stay, but Emma realizes Jake isn’t faking; he’s really scared. Can Emma get over her own fears in order to help her little brother?
From cupcakes to ice cream and donuts! Having written over thirty books about middle school girls and cupcakes and ice cream, Coco Simon decided it was time for a change; so she’s switched her focus to her third favorite sweet treat: donuts! When she’s not daydreaming about yummy snacks, Coco edits children’s books and has written close to one hundred books for children, tweens, and young adults, which is a lot less than the number of cupcakes, ice cream cones, and donuts she’s eaten. She is the author of the Cupcake Diaries, the Sprinkle Sundays, and the Donut Dreams series.