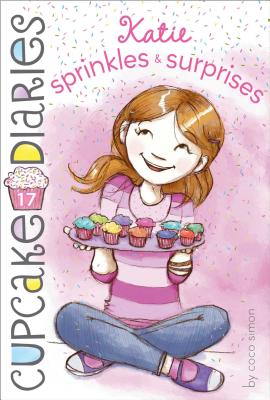 This is book number 17 in the Cupcake Diaries series.

The Cupcake Club comes to Katie’s defense when a surprise at school leads to unfair gossip.

When Katie’s mom says it’s time for Katie to meet her new boyfriend, Katie is excited and nervous. She thinks she’s prepared, but she’s shocked instead. Her mom’s boyfriend is Jeff Green—as in Mr. Green, a math teacher in her grade! Katie tries to act as normal as possible, but when mean girl Olivia finds out, she tells everyone that Katie is getting special treatment because her mom is dating a teacher. How can Katie stop Olivia and deal with all the new events in her life? It’s the Cupcake Club to the rescue, as Katie’s friends come to her defense, including an unexpected ally.
From cupcakes to ice cream and donuts! Having written over thirty books about middle school girls and cupcakes and ice cream, Coco Simon decided it was time for a change; so she’s switched her focus to her third favorite sweet treat: donuts! When she’s not daydreaming about yummy snacks, Coco edits children’s books and has written close to one hundred books for children, tweens, and young adults, which is a lot less than the number of cupcakes, ice cream cones, and donuts she’s eaten. She is the author of the Cupcake Diaries, the Sprinkle Sundays, and the Donut Dreams series.