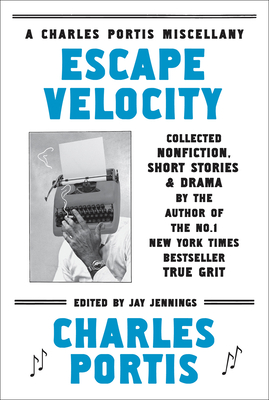 Collected here in Escape Velocity, edited by Jay Jennings, is his "miscellany" –– journalism, short fiction, memoir, and even the play Delray's New Moon, published for the first time in this volume.  Portis covers topics as varied as the civil rights movement, road tripping in Baja, and Elvis' s visits to his aging mother for publications such as the New York Herald Tribune and Saturday Evening Post.  Fans of Portis’s droll Southern humor and quirky characters will be thrilled at this new addition to his library, and those not yet familiar with his work will find a great introduction to him here.  Also included are tributes by accomplished authors including Donna Tartt and Ron Rosenbaum.
Charles Portis (b. December 28, 1933, d. February 17, 2020) lived in Arkansas, where he was born and educated. He served in the Marine Corps during the Korean War, was the London bureau chief of the New York Herald-Tribune, and was a writer for The New Yorker. He was the author of five novels: Norwood, The Dog of the South, Masters of Atlantis, True Grit, and Gringos.