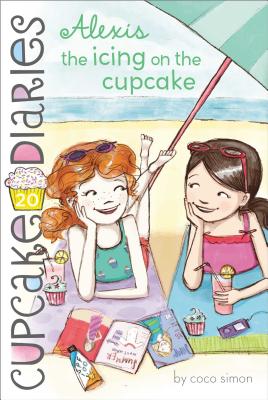 Alexis the Icing on the Cupcake (Cupcake Diaries #20) (Paperback)

This is book number 20 in the Cupcake Diaries series.

The Cupcake Club is thrilled to serve their sweets at a huge party—but can Alexis get over her growing pains before she sees her crush?

Alexis is excited about the latest Cupcake Club job—it’s a huge order for a neighbor’s BBQ/pool party. Not only will the CC make a lot of money, but Matt—Alexis’s super crush—will be there! But when Alexis goes to the mall with her friends, suddenly nothing fits her. Clothes in her usual size are too short, but when she goes up a size, everything is too big. What’s going on? Can she find an outfit that makes her feel as awesome on the outside as she is on the inside?
From cupcakes to ice cream and donuts! Having written over thirty books about middle school girls and cupcakes and ice cream, Coco Simon decided it was time for a change; so she’s switched her focus to her third favorite sweet treat: donuts! When she’s not daydreaming about yummy snacks, Coco edits children’s books and has written close to one hundred books for children, tweens, and young adults, which is a lot less than the number of cupcakes, ice cream cones, and donuts she’s eaten. She is the author of the Cupcake Diaries, the Sprinkle Sundays, and the Donut Dreams series.