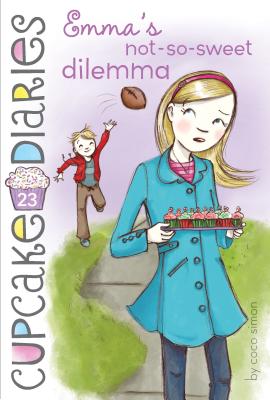 This is book number 23 in the Cupcake Diaries series.

Emma loses an important modeling job due to an injury she got while playing with her brothers. How will she pay for the beautiful holiday presents she planned for her family and friends?

Emma is playing ball with her brothers on an unusually warm winter afternoon. But an errant toss from her brother Matt hits her right on the nose! Luckily, it’s nothing more serious than a little swelling, but it’s enough to make her lose an important modeling job at The Special Day salon. Mona hires “mean girl” Olivia Allen to fill in. Olivia is thrilled, not only for the job, but also for a chance to spread some nasty rumors about Emma. Worst of all, now Emma can’t afford the beautiful holiday gifts she planned to buy her family and friends. Emma’s Cupcake Club pals remind her that the best gifts come from the heart, and don’t have a price tag.
From cupcakes to ice cream and donuts! Having written over thirty books about middle school girls and cupcakes and ice cream, Coco Simon decided it was time for a change; so she’s switched her focus to her third favorite sweet treat: donuts! When she’s not daydreaming about yummy snacks, Coco edits children’s books and has written close to one hundred books for children, tweens, and young adults, which is a lot less than the number of cupcakes, ice cream cones, and donuts she’s eaten. She is the author of the Cupcake Diaries, the Sprinkle Sundays, and the Donut Dreams series.