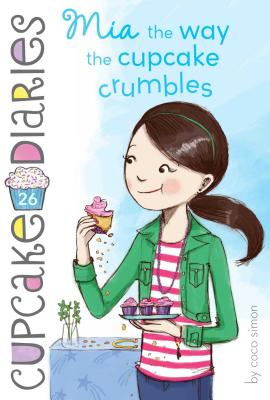 This is book number 26 in the Cupcake Diaries series.

Mia learns that you have to make your own luck—rather than rely on fun trinkets—in the latest addition to the Cupcake Diaries series.

Mia is having a truly terrible week. So far she’s failed a pop quiz, ruined a batch of cupcakes, and even dropped some icing on her favorite shirt! But her cousins from Puerto Rico are coming to visit, so Mia has something to look forward to—and they even bring her a little lucky charm as a gift!

When Mia’s luck immediately turns around, she’s convinced that her lucky charm really does have magic powers. But what will she do when her bad luck returns?
From cupcakes to ice cream and donuts! Having written over thirty books about middle school girls and cupcakes and ice cream, Coco Simon decided it was time for a change; so she’s switched her focus to her third favorite sweet treat: donuts! When she’s not daydreaming about yummy snacks, Coco edits children’s books and has written close to one hundred books for children, tweens, and young adults, which is a lot less than the number of cupcakes, ice cream cones, and donuts she’s eaten. She is the author of the Cupcake Diaries, the Sprinkle Sundays, and the Donut Dreams series.