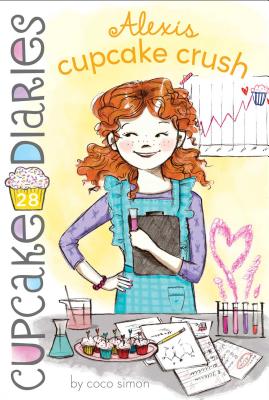 This is book number 28 in the Cupcake Diaries series.

Science whiz Alexis is out to prove that cupcakes are healthy in the latest addition to the Cupcake Diaries series.

Alexis thinks she has the perfect project to win the Science Fair—she’s going to prove that cupcakes are good for you! But all thoughts of the school competition go out the window when she spots her crush walking home with another girl. Maybe she should have whipped up a love potion instead!

Meanwhile, the girls are challenged to make rock and roll cupcakes for Martine Donay’s sweet sixteen—and she is anything but sweet! Cupcakes with black icing, anyone?
From cupcakes to ice cream and donuts! Having written over thirty books about middle school girls and cupcakes and ice cream, Coco Simon decided it was time for a change; so she’s switched her focus to her third favorite sweet treat: donuts! When she’s not daydreaming about yummy snacks, Coco edits children’s books and has written close to one hundred books for children, tweens, and young adults, which is a lot less than the number of cupcakes, ice cream cones, and donuts she’s eaten. She is the author of the Cupcake Diaries, the Sprinkle Sundays, and the Donut Dreams series.