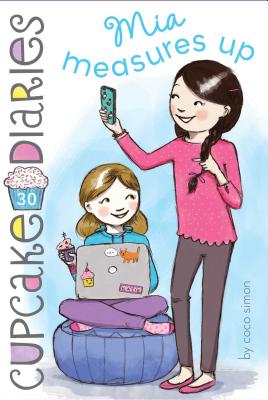 This is book number 30 in the Cupcake Diaries series.

Mia is being cyber-bullied, and she’s determined to find out who is responsible in the latest addition to the Cupcake Diaries series.

Mia is upset when her parents tell her she’s too young to go to a concert without adult supervision. She’s old enough to help run a cupcake business! Why can’t her parents see that she’s also responsible enough to do whatever she wants? And just when she’s reached a compromise with her parents (her older brother Dan will go to the concert with her), Mia finds out she’s being cyber-bullied on social media. It’s the Cupcake Club to the rescue as they all help Mia solve her online bullying mystery!
From cupcakes to ice cream and donuts! Having written over thirty books about middle school girls and cupcakes and ice cream, Coco Simon decided it was time for a change; so she’s switched her focus to her third favorite sweet treat: donuts! When she’s not daydreaming about yummy snacks, Coco edits children’s books and has written close to one hundred books for children, tweens, and young adults, which is a lot less than the number of cupcakes, ice cream cones, and donuts she’s eaten. She is the author of the Cupcake Diaries, the Sprinkle Sundays, and the Donut Dreams series.