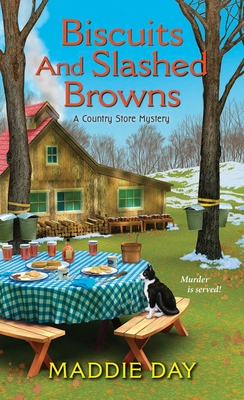 This is book number 4 in the A Country Store Mystery series.

For country-store owner Robbie Jordan, the National Maple Syrup Festival is a sweet escape from late-winter in South Lick, Indiana—until murder saps the life out of the celebration . . .

As Robbie arranges a breakfast-themed cook-off at Pans ‘N Pancakes, visitors pour into Brown County for the annual maple extravaganza. Unfortunately, that includes Professor Connolly, a know-it-all academic from Boston who makes enemies everywhere he goes—and this time, bad manners prove deadly. Soon after clashing with several scientists at a maple tree panel, the professor is found dead outside a sugar shack, stabbed to death by a local restaurateur’s knife. When an innocent woman gets dragged into the investigation and a biologist mysteriously disappears, Robbie drops her winning maple biscuits to search for answers. But can she help police crack the case before another victim is caught in a sticky situation with a killer?
Maddie Day is a talented amateur chef and holds a Ph.D. in Linguistics from Indiana University. An Agatha-nominated and Amazon-bestselling author, she is a member of Sisters in Crime and Mystery Writers of America and also writes award-winning short crime fiction which has appeared in a number of juried anthologies. She lives with her beau and three cats in Massachusetts, where she's currently working on her next Country Store mystery when she isn't cooking up something delectable in the kitchen.