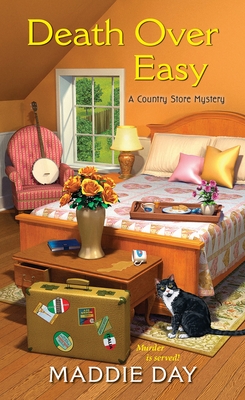 This is book number 5 in the A Country Store Mystery series.

Restaurateur Robbie Jordan is ready for the boost in business a local music festival brings to South Lick, Indiana, but the beloved event strikes a sour note when one of the musicians is murdered . . .

June’s annual Brown County Bluegrass Festival at the Bill Monroe Music Park in neighboring Beanblossom is always a hit for Robbie’s country store and café, Pans ‘N Pancakes. This year, Robbie is even more excited, because she’s launching a new bed and breakfast above her shop. A few festival musicians will be among Robbie’s first guests, along with her father, Roberto, and his wife, Maria. But the celebration is cut short when a performer is found choked to death by a banjo string. Now all the banjo players are featured in a different kind of lineup. To clear their names, Robbie must pair up with an unexpected partner to pick at the clues and find the plucky killer before he can conduct an encore performance . . .

Includes Recipes for You to Try!
Maddie Day is a talented amateur chef and holds a Ph.D. in Linguistics from Indiana University. An Agatha-nominated and Amazon-bestselling author, she is a member of Sisters in Crime and Mystery Writers of America and also writes award-winning short crime fiction, which has appeared in a number of juried anthologies. She lives with her beau and three cats in Massachusetts, where she's currently working on her next Country Store mystery when she isn't cooking up something delectable in the kitchen.