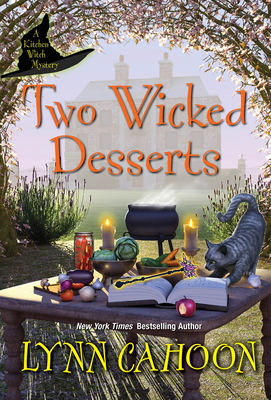 This is book number 2 in the Kitchen Witch Mysteries series.

Magic Springs, Idaho, may be a small town, but Mia Malone is living an enchanted life running her own catering business and cooking school. And while she's teaching the locals culinary craft, her grandmother is teaching her witchcraft for the day she inherits the family magical spells that have been passed down for generations. Unfortunately, all that knowledge is not helping Mia or her grandmother in removing the spirit of warlock Dorian Alexander from Mia's cat Mr. Darcy.

But even though Dorian hasn't yet left this earthly plane, his spells have already been transferred to his daughter Cindy's grimoire. An actress looking for her big Hollywood break, Cindy is hoping there's something in her father's bag of tricks to make her a star. But playing with magic has only resulted in a trip to Idaho where Cindy finds herself the number one suspect in the murder of a hitman whose body was found in the garden of Mia's Morsels. Now it's up to Mia to conjure up a killer before everything she's worked so hard for vanishes with a poof!
Lynn Cahoon is the New York Times and USA Today bestselling author of the Kitchen Witch Mysteries, the Cat Latimer Mystery series, the Tourist Trap Mysteries, and the Farm-to-Fork series. Originally from Idaho, she grew up living the small-town life she now loves to feature in her novels. A member of Sisters in Crime, Mystery Writers of America, and International Thriller Writers, she lives with her husband and two fur babies in a small historic town on the banks of the Mississippi River. Visit her at LynnCahoon.com.