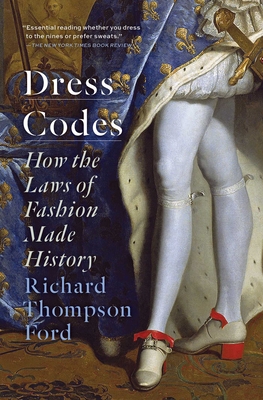 Dress Codes: How the Laws of Fashion Made History (Paperback)


On Our Shelves Now
A “sharp and entertaining” (The Wall Street Journal) exploration of fashion through the ages that asks what our clothing reveals about ourselves and our society.

Dress codes are as old as clothing itself. For centuries, clothing has been a wearable status symbol; fashion, a weapon in struggles for social change; and dress codes, a way to maintain political control. Merchants dressing like princes and butchers’ wives wearing gem-encrusted crowns were public enemies in medieval societies structured by social hierarchy and defined by spectacle. In Tudor England, silk, velvet, and fur were reserved for the nobility, and ballooning pants called “trunk hose” could be considered a menace to good order. The Renaissance-era Florentine patriarch Cosimo de Medici captured the power of fashion and dress codes when he remarked, “One can make a gentleman from two yards of red cloth.” Dress codes evolved along with the social and political ideals of the day, but they always reflected struggles for power and status. In the 1700s, South Carolina’s “Negro Act” made it illegal for Black people to dress “above their condition.” In the 1920s, the bobbed hair and form-fitting dresses worn by free-spirited flappers were banned in workplaces throughout the United States, and in the 1940s, the baggy zoot suits favored by Black and Latino men caused riots in cities from coast to coast.

Even in today’s more informal world, dress codes still determine what we wear, when we wear it—and what our clothing means. People lose their jobs for wearing braided hair, long fingernails, large earrings, beards, and tattoos or refusing to wear a suit and tie or make-up and high heels. In some cities, wearing sagging pants is a crime. And even when there are no written rules, implicit dress codes still influence opportunities and social mobility. Silicon Valley CEOs wear t-shirts and flip-flops, setting the tone for an entire industry: women wearing fashionable dresses or high heels face ridicule in the tech world, and some venture capitalists refuse to invest in any company run by someone wearing a suit.

In Dress Codes, law professor and cultural critic Richard Thompson Ford presents a “deeply informative and entertaining” (The New York Times Book Review) history of the laws of fashion from the middle ages to the present day, a walk down history’s red carpet to uncover and examine the canons, mores, and customs of clothing—rules that we often take for granted. After reading Dress Codes, you’ll never think of fashion as superficial again—and getting dressed will never be the same.
Richard Thompson Ford is a Professor at Stanford Law School. He has written about law, social and cultural issues and race relations for The New York Times, The Washington Post, San Francisco Chronicle, and Slate, and has appeared on The Colbert Report and The Rachel Maddow Show. He is the author of the New York Times notable books The Race Card and Rights Gone Wrong: How Law Corrupts the Struggle for Equality. He lives in San Francisco.
“Dress Codes explores how for centuries fashion has marked a pathway for personal liberation and social critique even when it sought to reinforce class, race, and gender hierarchies. From nuns’ habits to flappers’ fringe to burkinis and hijabs, from Joan of Arc’s armor to Martin Luther King’s Sunday best, Richard Thompson Ford reveals a history of individual imagination capable of outwitting and recasting even the strictest rules. Ford’s writing is sharp, witty, and brilliant, with the elegance and craft of a bespoke suit."
— Daniel Sharfstein, Professor at Vanderbilt University and author of Thunder in the Mountains: Chief Joseph, Oliver Otis Howard, and the Nez Perce War

“I think that Dress Codes is long overdue. Clothing is at the heart of culture, indeed it is almost a definition of what we mean by the term culture, a constructed but ever changing expression of social relationships, beliefs and ideologies. We should all, as Richard Thompson Ford does so magnificently within this book, be taking fashion much more seriously.”


— Ruth Goodman, author of How to be a Victorian and The Domestic Revolution

"We all abide by dress codes, whether required to do so or not. The author’s discussion embraces a vast body of knowledge, from what might be called fashion anthropology to a philosophy of sartorial splendor, and he’s an assured, genial narrator. He has an acute eye for detail, too...For the clotheshorse and the jeans-clad alike, a lucid, entertaining exploration of how and why we dress as we do."
— Kirkus (Starred)

“An intriguing history of formal and informal rules governing what people wear…. [Ford] makes a convincing case that dress codes reveal much about the social order and the pursuit of individual liberty. This jam-packed history casts its subject in a new light."
— Publishers Weekly

"In Dress Codes, Ford has created a thorough and well-thought-out history of fashion from a legal and societal perspective...Readers will come away with a new understanding of—and critical eye for—what we wear and why."
— BookPage

“An entertaining read, Dress Codes shows how fashion can both reflect and shape society.”
— The Economist

"Essential reading whether you dress to the nines or prefer sweats...Ford’s writing is steeped in extensive research and makes what could be a dull history lesson about fashion a deeply informative and entertaining study of why we dress the way we do, and what that tells us about class, sexuality and power."
— The New York Times Book Review

"A sharp and entertaining history of the rules of fashion. Mr. Ford skillfully examines how fashion, far from being mere frivolity, has shaped people’s lives from the 14th century to the present."
— Wall Street Journal

“You will probably never think of fashion as something trivial again.…the greatest strength of this book (on fashion!) is its intellectual depth. Ford asks us to question unconscious beliefs, to realize that we almost never do so, to understand that the simplest choices are fraught with meaning, and yet that meaning can and does change all the time.”
— The Free Lance-Star

"Dress Codes: How the Laws of Fashion Made History is a forensic examination of what we wear and how that has evolved in tandem with political control and social change...Piercing."
— China Post Magazine

"Dress Codes: How the Laws of Fashion Made History is a new book by Richard Thompson Ford, a Stanford Law School professor who has terrific personal style...The joy of Ford’s book comes from learning about all the things people have historically been banned from doing to or with clothes."
— NYMAG's The Cut