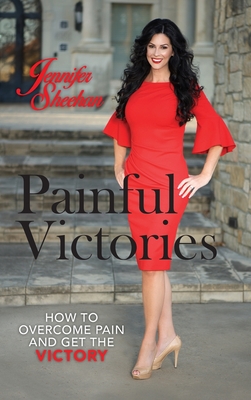 Painful Victories: How to Overcome Pain and Get The Victory (Hardcover)

My name is Jennifer Sheehan. I was born and raised in Southern California to a bipolar, alcoholic, pill-popping mother who was married six times. I was the oldest of four children and we were mentally and physically abused our whole life. We got free lunches, food stamps, clothes from garage sales, and even went dumpster diving behind the grocery stores after they closed. We grew up poor and lived in some incredibly rough neighborhoods. My mother could go from happy, to the kind of rage I have never seen in my life and unfortunately took it out on us children. My mother got rid of us all for free by sending us to church camp for a week when I was in 7th grade. That was the best gift my mother ever gave me because, at church camp, I prayed to receive Jesus as my Lord and Savior, and He became my everything; He changed my outcome and has always been enough

I served four years in the Army with one year in Iraq. I became "Supply" and the armorer in charge of maintaining and repairing the weapons. I went from prom princess in high school, to being in Iraq in the middle of a war I believe I became a soldier in the Army to become now a soldier in God's Army

It is shocking to most people looking at my life today and hearing where I came from. God took this abused, broken girl, and has lifted her up for His glory. We are all looking for love, joy, and peace but unfortunately, we are trying to get it from people and things which will let us down. When you place your trust in God to give you these things, He will not disappoint you and you can let people off the hook.