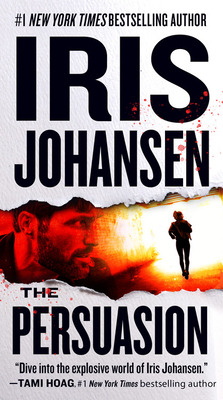 This is book number 26 in the Eve Duncan series.

When she becomes a madman's target, Eve Duncan's daughter Jane must team up with longtime love interest Seth Caleb in this suspense novel from the #1 bestselling author of Smokescreen.

Forensic sculptor Eve Duncan and ex-Navy Seal Joe Quinn are about to give Seth Caleb their trust for the most important duty of his life: keeping their daughter, Jane, safe at any cost. Her talent as an artist has caught the attention of a brilliant psychopath with a violent past.
Seth, Jane's strongest ally and fiercest protector, is determined to keep her out of danger, but that becomes nearly impossible when Jane is forced to take matters into her own hands and confronts the madman who wants her for himself . . . and wants Seth Caleb dead.
As Jane and Seth chase down their bloodthirsty adversary, they finally commit to a life together -- in the culmination of the epic love story that fans have been eagerly anticipating. As the two come face to face with danger, one thing is made clear: it will take both of them working together to confront and defeat this evil.
Iris Johansen is the #1 New York Times bestselling author of more than thirty consecutive bestsellers. Her series featuring forensic sculptor Eve Duncan has sold more than twenty million copies and counting and was the subject of the acclaimed Lifetime movie The Killing Game. Along with her son Roy, Iris has also co-authored the New York Times bestselling series featuring investigator Kendra Michaels. She lives near Atlanta, Georgia.
"Fast-paced... The magnetic relationship between Jane and Seth adds heat to the tense plot."—Publishers Weekly

"A satisfying balance between electrifying action and emotional intensity."—Booklist

"Fans will want to read THE PERSUASION to catch up on these characters' lives and enjoy the thrill of the hunt as everyone works together to bring down Luca."—BookReporter.com

"If you love a mystery that will hold your interest in bloody hands; a strong tie between a couple who aren't sure what to do with each other but can't let go; danger, drama, and intrigue then you have to get your hands on THE PERSUASION."—FreshFiction.com

"Dive into the explosive world of Iris Johansen, where villains get exactly what they deserve and the good guys - eventually - win the day. That's a world I want to live in!"—Tami Hoag, #1 New York Times bestselling author

"Just by seeing the Iris Johansen name....you know [it] will be an explosive, unforgettable story."—Suspense Magazine

"Johansen keeps readers on the edge of their seats."—Booklist