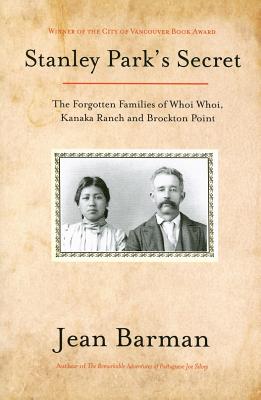 Shortlisted for George Ryga Award for Social Awareness in B.C. Writing and Publishing

Each year, over eight million people visit Stanley Park, a 400-hectare (1000-acre) haven of beauty that offers a backdrop of majestic cedars and firs and an environment teeming with wildlife just steps from the sidewalks and skyscrapers of Vancouver. But few visitors stop to contemplate the secret past of British Columbia's most popular tourist destination.

Officially opened in 1888, Stanley Park was born alongside the city of Vancouver, so it is easy to assume that the park was a pristine wilderness when it was first created. But much of it had been logged and it was home to a number of settlements. Aboriginal people lived at the villages of Whoi Whoi, now Lumberman's Arch, and nearby Chaythoos. Some of the immigrant Hawaiians earlier employed in the fur trade took jobs at the lumber mills that dotted Burrard Inlet from the 1860s and settled at "Kanaka Ranch," which was located just outside the park's southeast boundary. Others resided at Brockton Point on the peninsula's eastern tip. Only in 1958 was the last of the many families forced out of their homes and the park returned to its supposed "pristine" character.

Working in collaboration with descendants of the families who once lived in the park area, historian Jean Barman skilfully weaves together the families' stories with archival documents, Vancouver Parks Board records and court proceedings to reveal a troubling, yet deeply important facet of BC's history.

Jean Barman is an award-winning historian and author of over a dozen books about British Columbian and Canadian history. Much of her writing attends to the stories and histories of Indigenous Peoples and to Canadian women and families. Her writing has garnered over a dozen Canadian and American awards, including the Governor General’s History Award for Scholarly Research. She is professor emeritus at the University of British Columbia, a fellow of the Royal Society of Canada and the recipient of a Queen Elizabeth II Diamond Jubilee Medal. She holds graduate degrees from Harvard University, the University of California at Berkeley and University of British Columbia, and an honorary doctorate from Vancouver Island University. Jean lives in Vancouver, BC.