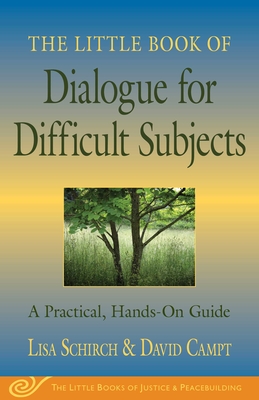 The Little Book of Dialogue for Difficult Subjects: A Practical, Hands-On Guide (Justice and Peacebuilding) (Paperback)


Usually Ships in 1-5 Days
Here is a process for talking about tension-filled topics. Useful for families, small groups, businesses, and private and governmental organizations, now, more than ever, because we are divided by political party, race, religion, and region, dialogue is an essential tool.

The word "dialogue" suffers from over-use, yet its practice is as transforming and as freshly hopeful as ever. Authors Schirch and Campt demonstrate dialogue's life and possibilities in this clear and absorbing manual: "Dialogue allows people in conflict to listen to each other, affirm their common ground, and explore their differences in a safe environment." Chapters include: Defending Dialogue, Organizing a Dialogue Process, Moving from Dialogue to Action, Assessing Dialogue Effectiveness and more.

Schirch has worked throughout the Southern hemisphere in peacebuilding projects. Campt has focused on racial and class reconciliation in American cities.

Part of the Little Book of Justice and Peacebuilding Series.
Lisa Schrich is a professor of peacebuilding at Eastern Mennonite University (EMU) in Harrisonburg, Virginia, and prgram director of the 3D Security Initiative (www.3Dsecurity.org), which promotes conflict prevention and peacebuilding in U.S. security policymaking. With colleagues in the Center for Justice and Peacebuilding at EMU, Schirch consults with a network of organizations involved in peacbuilding activities throughout the U.S., Latin America, Africa, Asia, and Europe. She has worked in over 20 countries. A former Fulbright Fellow in East and West Africa, Schirch has written four books and numbrous articles on conflict preventions and peacebuilding. She is a frequent public speaker and has TV and radio experience discussing U.S. foreign policy. She holds a B.A. in International Relations from the University of Waterloo, Canada, and a M.S. and Ph.D. in Conflict Analysis and Resolution from George Mason University.