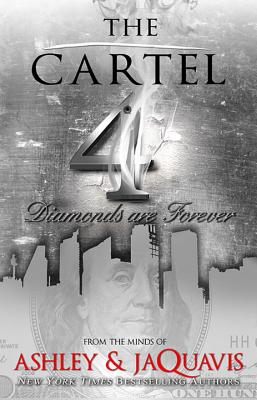 The Cartel 4: Diamonds Are Forever (Paperback)

This is book number 4 in the Cartel series.

You thought The Cartel was over, but Diamonds are forever. . . .
The Diamond family has survived murder, deceit, and betrayal. Through it all, they're still standing tall, and a new era has begun.
After surviving a failed attempt on her life, Breeze has moved into the queen's position by Zyir's side. Zyir has taken over the empire and locked down Miami's streets. He has the world in his palms, but there is always new blood ready to overthrow the throne.
Young Carter has retired and moved away from the madness--that is, until he gets an unexpected visitor at his home. This person shakes up the whole family, causing chaos that threatens to bring down the Cartel for good.
New York Times bestselling authors Ashley and JaQuavis deliver the highly anticipated fourth installment of the wildly popular Cartel series.
Ashley & JaQuavis hit the street lit scene at the age of 17 when they were discovered by Carl Weber. Their first novel, Dirty Money, was an instant hit, putting them on the road to literary success. They have published more than twenty novels as a duo, including the New York Times bestselling Cartel series. They are pursuing movie and television projects to bring some of their blockbuster books to the big screen. Now married, the pair still lives in Flint, Michigan, the city that inspired many of their gritty urban tales.