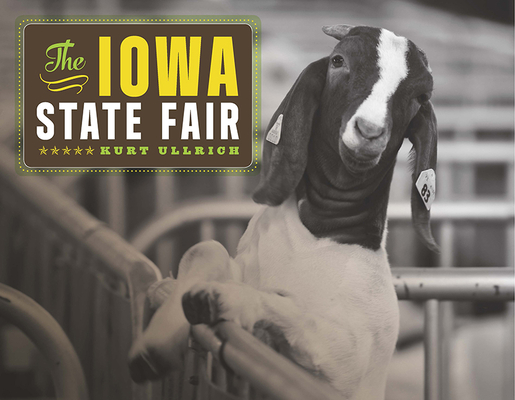 The Iowa State Fair (Iowa and the Midwest Experience) (Paperback)


Special Order
Every year in early August, a breeze borne by silent messengers from another time blows through Iowa. It carries a whiff of something wonderful, something far off and a bit unclear, yet oddly familiar. It's a reminder that an extraordinary annual event is about to take place, just as it has for more than 150 years: the Iowa State Fair.

In 2013, Kurt Ullrich set out to chronicle the magic of the Iowa State Fair in words and photographs. Join him as August days and nights blow warm and easy over the fairgrounds, brushing lightly against fellow travelers on this earth, both human and not. He captures precious moments of extreme joy and unbridled delight in these beautiful black-and-white images, celebrating the brash rural energy of the fair, from Big Wheel races to people-watching goats, fair queen contestants to arm wrestlers, Percherons to ponies. Prize pigs, prize sheep, prize apples, and the famous butter cow all have their moment in the limelight. Iowa’s very best ear of corn and old friends reminiscing outside their RVs draw the photographer’s fond eye, as do brightly lit beer stands and the brilliant arc of the Ferris wheel against the night sky.

If you always go to the Iowa State Fair, this book is for you. If you’ve never been, it will show you what you’re missing—and you’ll understand why it’s well past time you dropped by.

“You just can’t beat all the fun you have at the Iowa State Fair. It is Iowa and Iowans at our best!”—Governor Terry E. Branstad


“Kurt Ullrich immersed himself in the 2013 Iowa State Fair with awe and curiosity. He competed, conversed, indulged, and enjoyed himself as a true Iowan while documenting the process. His images show the diversity and beauty of the state's greatest event.”—Mary Willie, multimedia journalist, Des Moines Register


“You can almost smell the corndogs. . . . In his photographs, Kurt Ullrich captures the food, the fun, and, best of all, the faces—everything that makes the Iowa State Fair unforgettable.”—Sally Finder, editor, Meredith Corporation