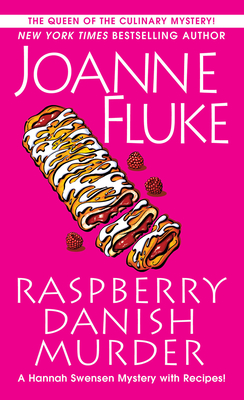 This is book number 21 in the A Hannah Swensen Mystery series.

Thanksgiving has a way of thawing the frostiest hearts in Lake Eden. But that won’t be happening for newlywed Hannah Swensen Barton—not after her husband suddenly disappears . . .

Hannah has felt as bitter as November in Minnesota since Ross vanished without a trace and left their marriage in limbo. Still, she throws herself into a baking frenzy for the sake of pumpkin pie and Thanksgiving-themed treats while endless holiday orders pour into The Cookie Jar. Hannah even introduces a raspberry Danish pastry to the menu, and P.K., her husband’s assistant at KCOW-TV, will be one of the first to sample it. But instead of taking a bite, P.K., who is driving Ross’s car and using his desk at work, is murdered. Was someone plotting against P.K. all along or did Ross dodge a deadly dose of sweet revenge? Hannah will have to quickly sift through a cornucopia of clues and suspects to stop a killer from bringing another murder to the table.

Features Over a Dozen Cookie and Dessert Recipes from The Cookie Jar!
JOANNE FLUKE is the New York Times bestselling author of the Hannah Swensen mysteries, which include Double Fudge Brownie Murder, Blackberry Pie Murder, Cinnamon Roll Murder, and the book that started it all, Chocolate Chip Cookie Murder. That first installment in the series premiered as Murder, She Baked:  A Chocolate Chip Cookie Mystery on the Hallmark Movies & Mysteries Channel. Like Hannah Swensen, Joanne Fluke was born and raised in a small town in rural Minnesota, but now lives in Southern California. Please visit her online at www.JoanneFluke.com.