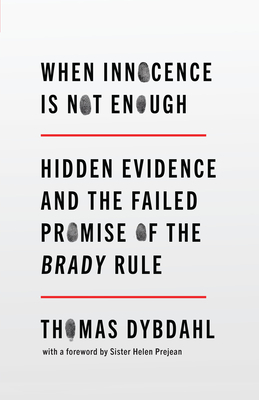 When Innocence Is Not Enough: Hidden Evidence and the Failed Promise of the Brady Rule (Hardcover)

A gripping work of narrative nonfiction, told across time, that exposes what's at stake when prosecutors conceal evidence--and what we can do about it

The Brady rule was meant to transform the U.S. justice system. In soaring language, the Supreme Court decreed in 1963 that prosecutors must share favorable evidence with the defense--part of a suite of decisions of that reform-minded era designed to promote fairness for those accused of crimes. But reality intervened. The opinion faced many challenges, ranging from poor legal reasoning and shaky precedent to its clashes with the very foundations of the American criminal legal system and some of its most powerful enforcers: prosecutors.

In this beautifully wrought work of narrative nonfiction, Thomas L. Dybdahl illustrates the promise and shortcomings of the Brady rule through deft storytelling and attention to crucial cases, including the infamous 1984 murder of Catherine Fuller in Washington, DC. This case led to eight young Black men being sent to prison for life after the prosecutor, afraid of losing the biggest case of his career, hid information that would have proven their innocence.

With a seasoned defense lawyer's unsparing eye for detail, Thomas L. Dybdahl chronicles the evolution of the Brady rule--from its unexpected birth to the series of legal decisions that left it defanged and ineffective. Yet Dybdahl shows us a path forward by highlighting promising reform efforts across the country that offer a blueprint for a legislative revival of Brady's true spirit.

Thomas L. Dybdahl, who has degrees in theology, journalism, and law, is a former staff attorney at the Public Defender Service for the District of Columbia, where he worked in both the trial and appellate divisions, and tried twenty-five homicide cases. The author of When Innocence Is Not Enough (The New Press), he lives in Boulder, Colorado.