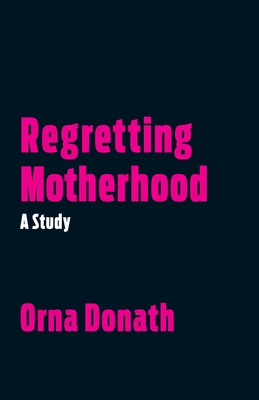 Women who opt not to be mothers are frequently warned that they will regret their decision later in life, yet we rarely talk about the possibility that the opposite might also be true—that women who have children might regret it. Drawing on years of research interviewing women from a variety of socioeconomic, educational, and professional backgrounds, sociologist Orna Donath treats regret as a feminist issue: as regret marks the road not taken, we need to consider whether alternative paths for women currently are blocked off. She asks that we pay attention to what is forbidden by rules governing motherhood, time, and emotion, including the cultural assumption that motherhood is a “natural” role for women—for the sake of all women, not just those who regret becoming mothers.

If we are disturbed by the idea that a woman might regret becoming a mother, Donath says, our response should not be to silence and shame these women; rather, we need to ask honest and difficult questions about how society pushes women into motherhood and why those who reconsider it are still seen as a danger to the status quo. Groundbreaking, thoughtful, and provocative, this is an especially needed book in our current political climate, as women's reproductive rights continue to be at the forefront of national debates.
ORNA DONATH is a sociologist and anthropologist whose work focuses on reproduction, motherhood, and non-motherhood; she currently lectures at several universities in Israel. Her previous book, Making a Choice: Being Childfree in Israel, was published in 2011. Donath has also served as chair of the Hasharon Rape Crisis Center in Raanana, where she continues to volunteer.
“Donath breaks open what she describes as an ‘unspoken taboo,’ bringing the notion that women regret becoming mothers into the public discourse with her latest research.… The most valuable elements of the book are the different perspectives provided by the interviews, which reflect a striking amount of self-awareness (and, often, suffering) from women who have otherwise largely kept silent.”
—Publishers Weekly

"Forthrightly feminist ... Donath’s study fills a gap in discussions of women’s lives and choices. While it will undoubtedly be a hard pill for many to swallow, it is also a necessary one."
—Foreword Reviews


"Donath carves out a much-needed space for these women to share, in their own words, stories about how they got to where they are, and how they manage now. Mixed in with these interviews is analysis by Donath, who expertly examines and questions the structures of a capitalistic, patriarchal society that not only contributes to women finding themselves in this position, but also prevents them from speaking about it. Many have never heard sentiments like the ones shared by Donath's interviewees—and that needs to change."
—BUST Magazine