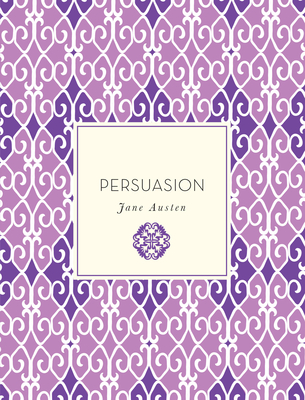 This is book number 54 in the Knickerbocker Classics series.

Published after Jane Austen’s death in 1817, Persuasion is poignant and passionate story of love, disappointment, loss, and redemption. Twenty-seven-year-old Anne Elliot is resigned to an unhappy fate and forced to move with her family to humbler lodgings when an old, lost love reenters her life.

The handsome young naval officer, whose marriage proposal she was persuaded to reject seven years prior, has moved up in the world, and now she has a second chance at love. Presenting a heroine who is older and wiser than those in her other books, Jane Austen’s final novel is now available as a portable, elegantly designed clothbound edition with an elastic closure and a new introduction.

The Knickerbocker Classics bring together the works of classic authors from around the world in stunning gift editions to be collected and enjoyed. Complete and unabridged, these elegantly designed cloth-bound hardcovers feature a slipcase and ribbon marker, as well as a comprehensive introduction providing the reader with enlightening information on the author's life and works.

Jane Austen was born in 1775 at Steventon, Hampshire. She was the seventh child of the local rector, and her life, by modern standards, was uneventful. In 1801 she moved with her parents to Bath but returned to Hampshire when her father died, settling in the village of Chawton. She remained there until 1817, when she moved to Winchester to be within easy reach of her doctor. She died that year, at age forty-one, and is buried in Winchester Cathedral, which also contains a plaque in honor of her memory. Four of her novels were published anonymously during her lifetime; two more, one of which was Persuasion, appeared posthumously.

Deborah Lutz is the Morton Professor of English at the University of Louisville. Her most recent book, The Brontë Cabinet: Three Lives in Nine Objects, was shortlisted for the PEN/Weld Award for Biography. Her others books include Relics of Death in Victorian Literature and Culture; The Dangerous Lover: Gothic Villains, Byronism, and the Nineteenth-Century Seduction Narrative; and Pleasure Bound: Victorian Sex Rebels and the New Eroticism (Norton, 2011). She is the editor of the fourth Norton Critical Edition of Jane Eyre.