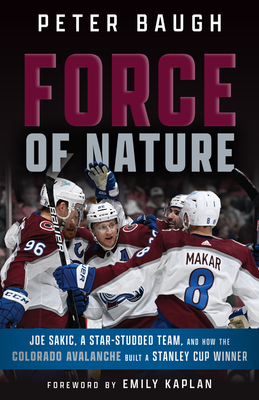 Force of Nature: How the Colorado Avalanche Built a Stanley Cup Winner (Paperback)


Backordered
The Colorado Avalanche entered the 2021-2022 NHL season with a sense of unfinished business. After years of strategic building under Joe Sakic that had produced a truly formidable core of talent, the Avs turned years of postseason heartbreak into fuel for one of the most dominant Stanley Cup playoff runs in recent memory.

In Force of Nature, The Athletic's Peter Baugh expertly retraces the team's unforgettable championship season as well as the elements that made it all possible—the competitive drive of Nathan MacKinnon, the leadership of Gabriel Landeskog, Cale Makar's meteoric rise, and more.

Featuring in-depth reporting and an unforgettable cast of characters both on the ice and in the front office, this is the story of how the Avalanche built the winningest team in the salary cap era, vanquished the reigning back-to-back champion Tampa Bay Lightning, and returned the Stanley Cup to Colorado.
Peter Baugh is a Denver-based sportswriter who covers the Colorado Avalanche for The Athletic. A St. Louis native, he attended the University of Missouri and has published writing in the Washington Post, St. Louis Post-Dispatch, Columbia Missourian, and POLITICO.