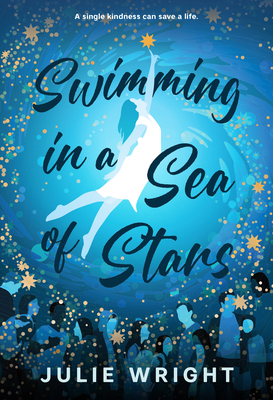 Swimming in a Sea of Stars (Hardcover)


Unavailable
Not Yet Published
Journal entry: Heading to school. I know what everyone will say. There goes the girl who tried to kill herself. Addison is no stranger to feeling stressed, insecure, and sad. Her therapist recommended she keep a journal to help her understand those feelings better, which she really needs today. It's her first day back to school, several weeks after she survived her suicide attempt. She knows there are rumors about why she did it: A lousy home life? Bullying? Heartbreak? None of them are true, but it doesn't matter because Addison still feels like she's drowning. She still holds secrets she's not ready to share. During the school day, Addison encounters four other students struggling with their own secrets: Booker is anxious about seeing Addison. They were sort of a couple until he tried to kiss her. She fled and then tried to end her life. Those two things couldn't be related, could they? Celia feels trapped by her mother's abusive boyfriend. She can guess why Addison did what she did. Damion is TikTok-famous and thinks befriending Addison could boost his followers. But what no one knows is he needs the world to remember him since his sick mom doesn't anymore. Avery is considered a loner and doesn't know Addison, but they have neighboring lockers. With Avery's older brother in jail for dealing drugs, Avery is desperate for meaningful human connection. Swimming in a Sea of Stars is a poignant and gripping novel about how we're all interconnected, like the stars in the night sky that form constellations and map out the universe, and if even one star goes missing, the effect is profound.

Julie Wright began writing her first book when she was fifteen years old. Since then, she has written twenty-six novels and her books have received several starred reviews and have been listed in the American Library Association's top ten romances of the year. She is a mental health advocate and loves spending time with the youth of our world. She's a sucker for almost all things nerdy: Doctor Who, Disneyland, the Marvel Universe, Harry Potter, Lord of the Rings, fairy tales, and Jane Austen. She believes in second chances, getting up and trying again, and in the power and magic of love, forgiveness, generosity, and compassion. She loves writing, reading, traveling, snorkeling, hiking, playing with her family, and watching her husband make dinner.