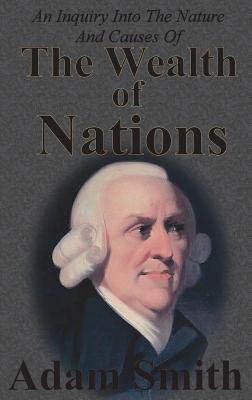 An Inquiry Into The Nature And Causes Of The Wealth Of Nations: Complete Five Unabridged Books (Hardcover)

The complete five unabridged books of The Wealth of Nations by Adam Smith. This epic collection of economic ideas show that people and free markets drive improvements, not governments and regulation.

First published the same year as the Declaration of Independence in 1776, it became a prescient blueprint for the new United States of America.

No student of thought should be without this historic book. This classic volume is provided here with full text at an affordable price.

BOOK I. OF THE CAUSES OF IMPROVEMENT IN THE PRODUCTIVE POWERS OF LABOR, AND OF THE ORDER ACCORDING TO WHICH ITS PRODUCE IS NATURALLY DISTRIBUTED AMONG THE DIFFERENT RANKS OF THE PEOPLE

BOOK II. OF THE NATURE, ACCUMULATION, AND EMPLOYMENT OF STOCK

BOOK III. OF THE DIFFERENT PROGRESS OF OPULENCE IN DIFFERENT NATIONS

BOOK V. OF THE REVENUE OF THE SOVEREIGN OR COMMONWEALTH