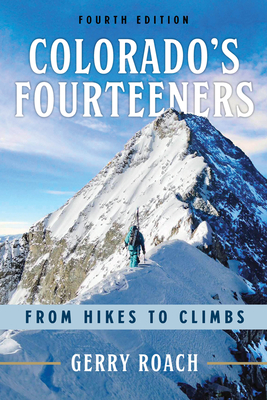 
On Our Shelves Now
Standard, alternate, and technical routes for all 58 Colorado Fourteener peaks

A classic guidebook known for its accuracy and comprehensiveness, Colorado’s Fourteeners has been updated for this thirtieth anniversary edition to include GPS coordinates, revised topographic maps, expanded route details, and new descriptions reflecting alterations to trail access. Besides the often-climbed standard routes, the guide describes many alternative and technical routes.

The trusted source for over 30 years, this is the guide to bring with you to peaks websites can't reach.
In more than 50 years of mountaineering, Gerry Roach has climbed in dozens of states and countries, including 12 Alaskan expeditions, 10 Andean expeditions, and 7 Himalayan expeditions. After climbing Mt. Everest, he became the second person to climb the highest peak on each of the seven continents. Closer to home, Roach has climbed more than 1,200 named peaks in Colorado, including all the fourteeners, which he completed for the first time in 1975. Roach lives in Boulder, Colorado, with his wife and climbing partner, Jennifer Roach.