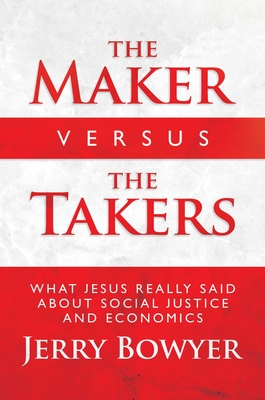 The Maker Versus the Takers: What Jesus Really Said About Social Justice and Economics (Hardcover)


Special Order
A close reading of the Gospels, taking history and archeology into account, demolishes the myth of a socialist Jesus.

Theologians virtually ignore the economic commentary in the Bible. In the few cases where it gets any attention, economic commentary in the Gospels and other New Testament writings tend to lapse into simplistic class warfare nostrums. Liberation theologians import Marxism wholesale (but they try to sell it retail) into theology. Academic historians of 1st Century Palestine/Judea have been pushing an account of a poor peasant Jesus leading a poor peasant's revolt based on the idea of mass displaced workers in Lower Galilee. The problem is the actual archeological findings paint a picture of an industrious and entrepreneurial economy during Jesus's time there. Reading the Gospels in light of archeology and history, which are now available to us, gives us a very different picture than the one you’ve been told regarding what Jesus taught about work and money.
Jerry Bowyer is a financial economist, a public speaker for business conferences, a frequent radio and television guest, an author and a journalist. He lives in Pennsylvania with his wife, Susan, and the youngest three of their seven children.
“We can no more stop participating in economics than we can suspend breathing, drinking water, or eating. That makes economics as spiritual as any other dimension of our existence, and Jesus had a lot to say about it. You won’t find a better guide to what Jesus said about economics than The Maker Versus the Takers, and there’s never been a better time to consider the topic than right now!”
— Joseph Castleberry, Ed.D., president, Northwest University and author of The Kingdom Net: Learning to Network Like Jesus

“Jesus is too often misunderstood. Biblical Christianity can be seen as irrelevant when we fail to both understand the historical context and use it for a better lens for contemporary application. Jerry Bowyer offers a provocative and critical set of insights into how economics and geopolitical factors shaped the Gospel narratives in a way that helps us consider how Jesus would have us engage our present world as ambassadors of the Jesus Administration. Stimulating, beneficial, and disturbing in a good way!”
— Mike Sharrow, CEO, The C12 Group

“Jerry Bowyer takes on the sensitive question of ‘can wealth be righteous?’ Curiously, this was a political question even in the days of Jesus. If you have ever wondered what Jesus thought of wealth or why the rich young ruler was turned away, then The Maker Versus the Takers is for you.”
— Gordon Robertson, president, The Christian Broadcasting Network

“Jerry Bowyer’s The Maker Versus the Takers is a tour de force! The teachings of Jesus are clear: either have a big state and a small god, or we can have a big God and a small state.”
— Chuck Bentley, CEO, Crown Financial Ministries, Founder, Christian Economic Forum

“There are very few subjects that modern Christians get more wrong than economics, and very few people more qualified to help them get it right than Jerry Bowyer. The Maker Versus the Takers is all at once readable, logical, exegetical, and most importantly, biblical. Jerry’s ability to help readers unpack all a text has to offer is extraordinary. The impact a Jesus-centered economics will have on our society is profound.”
— David L. Bahnsen, chief investment officer, The Bahnsen Group; trustee, National Review