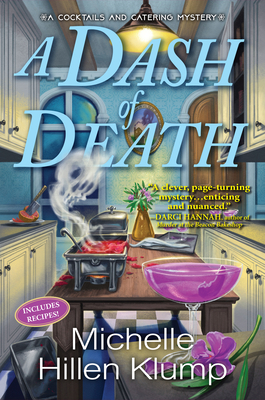 A Dash of Death (A Cocktails and Catering Mystery #1) (Hardcover)

This is book number 1 in the A Cocktails and Catering Mystery series.

A Houston reporter-turned-mixologist mixes it up with murder in this series debut from Michelle Hillen Klump, superbly catering to fans of Diane Mott Davidson and Lee Hollis.


Bad news for Samantha Warren: The plucky Houston, Texas, reporter lost her job and her fiancé in rapid succession. But Sam has a way of making lemonade out of the bitterest of lemons. At a meeting of the local historical-homes council, she serves up the homemade bitters that she made as gifts for her wedding party. She intends to use that as her “in” to become an in-demand party mixologist. But the party’s over for one of the council members, who keels over dead soon after he sips the bereft bride’s bitter brew.

It turns out that the victim, Mark, was poisoned—his drink spiked with oleander. Since Sam mixed the drink that Mark imbibed right before his demise, she finds herself at the front of the suspect line. Now, she’ll have to use all of her reporter’s wisdom and wiles to clear her name.

Who could have wanted Mark dead? His wife, Gabby? His girlfriend, Darcy? Someone who wanted his seat on the council? Or another citizen of this sweet Texas town that holds some seedy secrets?

Job hunting, building her mixology business, and fending off late-night phone calls from her nearly betrothed don’t leave much time for sleuthing. But if Sam can’t “pour” over the clues to find the killer, it may soon be last call for her.
Michelle Hillen Klump is a former newspaper reporter who covered government, courts and crime throughout Arkansas and Central Texas. Still a working journalist, she is also a member of Sisters in Crime. Her short fiction hasappeared in Crimson Streets and Tales of Texas, Volume II, a Houston short story anthology.
Praise for A Dash of Death:
“An impressively fun mystery read that is clever, deftly scripted, and a memorable read for all dedicated mystery buffs.”
—Midwest Book Review

“A Dash of Death is a winning mixture of bitters and sweet with a satisfying mystery and a protagonist you'll toast to!”
—Kate Lansing, author of the Colorado Wine mysteries

"With a cast of lively characters, this clever, page-turning mystery, set in historic Houston, is as enticing and nuanced as the delicious cocktails Hillen-Klump’s heroine mixes for both business and pleasure."
—Darci Hannah, author of Murder at the Beacon Bakeshop

“A delightful new cozy that’s a flavorful, spirited concoction infused with mystery and suspense that will keep you guessing until the bitter end.”
—Lee Hollis, bestselling author of the Hayley Powell Food and Cocktails mysteries

“A smart, satisfying read with a dash of cool cocktails! . . . It’s a well-plotted, well-written mystery, and I can’t wait to read the next in the series.”
—Tara Lush, author of Grounds for Murder

“A toast to A Dash of Death, a sparkling cocktail of murder and mystery that will captivate cozy mystery lovers . . . and sets the stage for what promises to be a great new series!”
—Amy Pershing, author of the Cape Cod Foodie Mysteries

“An intriguing opening to a spirited new series, A Dash of Death is just the right mix of bitters and sweet, flavorful characters and a well-crafted mystery that will keep you turning pages well into the night.”
—Lena Gregory, author of the All-Day Breakfast Cafe mysteries