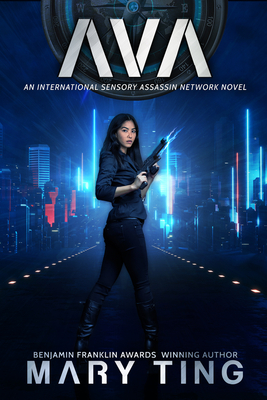 This is book number 5 in the International Sensory Assassin Network series.

The final installment of the Benjamin Franklin Gold-Award-Winning series is here.
The days of hiding are over. The battle for supremacy is here. The fate of the rebels is at hand.
Ava heads to South Korea to bring down the facility that manufactures the CODE army. But she can't do it alone. She'll have to trust fellow conspirators and put her life on the line.
When the South rebel leader searches for missing team members, she's captured and taken to the Korean ISAN base. There, she discovers a secret that could change the course of the war in their favor.
After the rebel mountain base is threatened, Ava has no choice but to comply with Korean ISAN demands—or end up killing everyone she loves.

Mary Ting is an international bestselling, award-winning author. She writes soulful, spellbinding stories that excite the imagination and captivate readers around the world. Her books span a wide range of genres, and her storytelling talents have earned a devoted legion of fans, as well as garnered critical praise.

Becoming an author happened by chance. It was a way to grieve the death of her beloved grandmother, and inspired by a dream she had in high school. After realizing she wanted to become a full-time author, Mary retired from teaching after twenty years. She also had the privilege of touring with the Magic Johnson Foundation to promote literacy and her children’ s chapter book: No Bullies Allowed.

www.ISAN.Agency
www.TangledTalesofTing.com
"Captivating from the very beginning … this thrilling dystopian drama has a splash of romance and tons of action." —School Library Journal

"The idea of using heightened sense was original. The characters help the readers to become invested in the story. Excellent world-building and a great treatment of a classic plot." —Benjamin Franklin Award

"A stunning sequel! Mary Ting takes us once again into the inventive world of ISAN—one of intrigue and betrayal—but this time, with deadly consequences. A must
read!" —Jonas Saul, bestselling author of the Sarah Roberts series