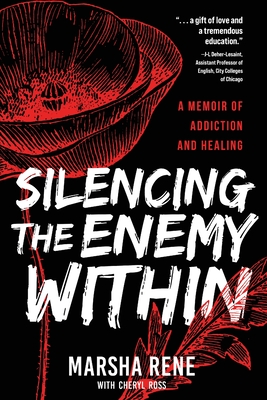 Silencing the Enemy Within: A Memoir of Addiction and Healing (Paperback)

By Marsha Rene, Cheryl Ross (With)

Marsha Rene seemed destined for the good life, raised by loving parents in a Long Island suburb where she and her brothers often rode their bikes until their father's whistle summoned them home for dinner. But at eight years old, her father died, leaving Marsha, her mother, and her brothers struggling to move forward.

In a few short years, Marsha, still grieving, became a drug addict and, in the drug underworld of '90s New York, experienced sexual abuse over and over. But Marsha had a weapon-hands that had the power to heal others. That discovery would lead her to get clean after more than ten years of active drug addiction, but she would stay in abusive romantic relationships, at a loss about how to end the cycle.

Would Marsha triumph over this too? In Silencing the Enemy Within: A Memoir of Addiction and Healing, learn the answer and pick up lessons that can help anyone, regardless of their addiction, get and stay clean.