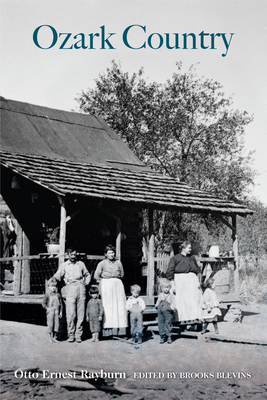 Published just days before America’s entry into World War II, Ozark Country is Otto Ernest Rayburn’s love letter to his adopted region. One of several chronicles of the Ozarks that garnered national attention during the Depression and war years, when many Americans craved stories about people and places seemingly untouched by the difficulties of the times, Rayburn’s colorful tour takes readers from the fictional village of Woodville into the backcountry of a region teeming with storytellers, ballad singers, superstitions, and home remedies.

Rayburn’s tales—fantastical, fun, and unapologetically romantic—portray a world that had already nearly disappeared by the time they were written. Yet Rayburn’s depiction of the Ozarks resonates with notions of the region that have persisted in the American consciousness ever since.

Born in Iowa and raised in Kansas, Otto Ernest Rayburn (1891–1960) was a teacher, writer, and magazine editor who devoted most of his life to the folklore and folkways of the Ozarks.

Brooks Blevins, a native of the Arkansas Ozarks, is the Noel Boyd Professor of Ozarks Studies at Missouri State University and the author or editor of ten books, including Arkansas/Arkansaw: How Bear Hunters, Hillbillies, and Good Ol' Boys Defined a State.

“A delightful literary frolic awaits the reader. Otto Rayburn declared that Ozarks ‘storytellers are born, not made.’ He wrote that his search for ‘true hillbillies’ took him from the ‘sublime to the ridiculous,’ but that only increased his love for the Ozarks. This admired folklorist entertained float fishermen, automobile tourists, and natives alike. Professor Brooks Blevins’s inspired introduction conveys perspective for Rayburn, while the volume is integrated into this classic American reprint series.”

—Lynn Morrow, editor of The Ozarks in Missouri History: Discoveries in an American Region