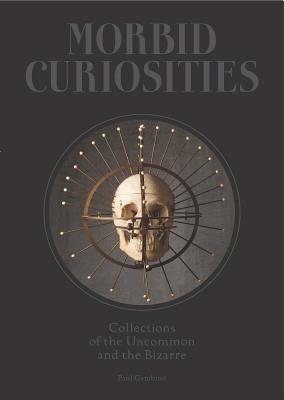 
Backordered
Step into the residences of the 18 collectors featured in this fascinating book and you will immediately realize that you have been granted entrance to a very special place. Many of these collections make their public debut in Morbid Curiosities making it a must for fans of the bizarre and curious. This showcase book documents the private world of collectors of the macabre as it features 18 unique collections, including skulls, prosthetics, mummified body parts, taxidermy, occult objects and various carnival and side–show and criminal ephemera.

Here you will meet Ryan and Regina who collect shrunken heads, Nathan Roberts who has hundreds of letters from serial killers, Brandon Hodge who has the world's biggest collection of Ouija Boards and many more. Author Paul Gambino says of the collectors, they could come from "a realm that seems far removed from their reality and populated by a fascinating group of people that appear to have stepped directly from Lord Byron's gothic dinner party in the summer of 1816."

Morbid Curiosities includes stunning, specially commissioned photography of both the individual objects and the context of how the collector exhibits their work, forming a unique showcase of the bizarre and the intriguing. Detailed captions tell the curious stories behind each object, many of which are being shown outside the private world of their collections for the first time and there is an extensive interview with each collector, explaining how and why they collect, and showcasing the most remarkable pieces from each collection.

Straight from the Morgue: NICOLE ANGEMI

A Masterpiece of the Macabre: RYAN MATTHEW COHN

The Art of Mourning: DANIELLE DEVEROUX

It's in Their Blood: STEVE & DANIEL ERENBERG

Messages from the Beyond: JOHN KOZIK

A Pleasure in Weeping: EVAN MICHELSON

Hangin' with the Dead: MIK MILLER

Curating the Macabre: BRENT S.
Paul Gambino has been an avid collector of the macabre for over 20 years and owns an extensive collection of nineteenth-century memorial photographs. His two decades of collecting have gained him access to some of the world's most elite collectors of the macabre.