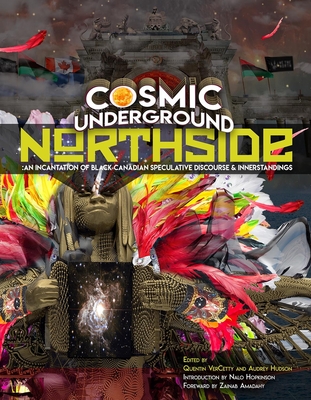 
Coming Soon - Available for Pre-Order Now
Cosmic Underground Northside operates as a seminal collection consisting of works from cross-generations and pan-national Black creatives and cultural producers from Canada. This generous book offers a glimpse of different innerstandings, a profound comprehension or conviction within one’s spirit or soul. We consider the following: what does Afrofuturism look like from a Canadian perspective? What are the unique elements of artistic expression in Black Canadian art? Considering Canada's history on Indigenous land, how do Black Canadians imagine their future in a colony that promotes erasure, yet claims multiculturalism? So ah wah dis? Qu'est-ce que c'est? Kisa sa ye? Cosmic Underground Northside: An Incantation of Black Canadian Speculative Discourse and Innerstanding is an archival book comprised of diasporic dialogues around liberation and spirituality. Significant contributions of poems, lyrics, prose, short stories and other expressive forms of literature along with vibrant illustrations, photographs, posters, mixed-media digital and analog rendered artworks by over 100 talented, gifted Black Canadian scholars and creatives. This is who we are.
CA
“(Cosmic Underground Northside) address(es) the state and the fate of the world, the long march of humanity through history, all of our voices, our perspectives, our imaginary worlds, and our struggles must be engaged. The peoples of Africa and of African descent all over the world can no longer tolerate to be excluded, bear to see the singularity and rich diversity of their experiences, their marks of civilization relegated to oblivion, to disregard, to indifference, to narratives of pity and misery, or to fatality…. (Cosmic Underground Northside) draw(s) in bold, broad strokes, in the here and now, the contours of a dazzling vision for the future. Each contribution is a priceless treasure, and an act of resistance.”  —the Right Honorable Michaëlle Jean, 27th Governor General of Canada, 3rd Secretary General of the International Organization of la Francophonie

“This is very timely with the success of the Raptors and everything within the creative industry... Growing up with a love for sci-fi and carnival, all of this together in a Canadian context is not just exciting and ground-breaking but important for the cultures of both, in Canada and the world.”  —Director X, Hip-Hop Mogul

“Quentin VerCetty and Audrey Hudson have assembled a ground-breaking and delightful collection, Cosmic Underground Northside, which dreams a Black Canadian future in conversation with the past, present, and global Africa real and imagined. Thus, time, space and consciousness are collapsed because to have a Black future requires that we have a tremendous leap of imagination.”  —Dr. Afua Cooper, Professor of Black Studies at Dalhousie University, 2018 Poet Laureate of Halifax Regional Municipality. Author of The Hanging of Angelique: The Untold Story of Slavery in Canada, and the Burning of Old Montreal