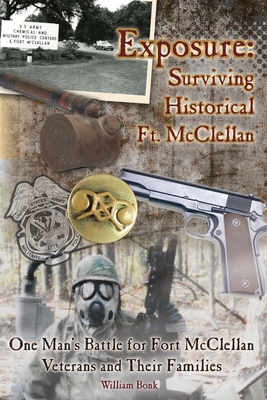 Bonk, a licensed private investigator, draws attention to the real possibility that veterans, their families, and civilians once assigned to now-closed Fort McClellan (FMC), Alabama were subjected to hazardous environmental conditions to include chemical weapon material and toxic chemicals starting in the early 1950s and continuing through 1999 and beyond.

"I want to attract the attention of the 535 members of the U.S. Congress," said Bonk, also a retired supervisory criminal investigator and former U.S. Army military police trainee who trained at FMC. I want them to be able to have a reason to move forward with a FMC health registry and work toward a presumption within the U.S. Department of Veterans Affairs that FMC veterans were adversely affected by exposure to dangerous contaminants."

The sad reality according to Bonk is that, "because of latency, dosage, time, and risk factors, FMC veterans have to fight individually to attempt to prove an in- service event and the service connection with a nexus between the two. In most cases, they were unknowingly exposed to a plethora of contaminants, making any argument difficult to prove."

Bonk establishes a timeline and meticulously traces the post's historical use of hazardous materials, such as chemical weapons material, ionizing radiation, pesticides, and heavy metals. Bonk bases his findings on data from public U.S. government reports, open source news articles, and multiple interviews with trainees and trainers stationed at FMC, which was comprised of almost 50,000 acres and originally home to the U.S. Army's Military Police and Chemical Schools. The reports often reveal ambiguity, uncertainty, speculation, and a total lack of due diligence when rendering conclusions and recommendations regarding contaminated parcels.