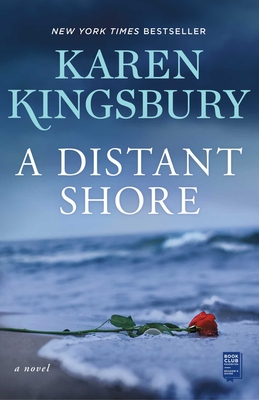 A Distant Shore: A Novel (Hardcover)

She was a child caught in a riptide in the Caribbean Sea. He was a teenager from the East Coast on vacation with his family. He dove in to save her, and that single terrifying moment changed both their lives forever.

Ten years later Jack Ryder is a daring secret agent with the FBI and Eliza Lawrence still lives on that pristine island. She’s an untainted princess in a kingdom of darkness and evil, on the brink of a forced marriage with a dangerous neighboring drug lord, a marriage arranged by her father.

This time when Jack and Eliza meet, there’s a connection neither of them can explain. Both their lives are on the line, and once again, the stakes are deadly high. Can they join forces in a complicated and dangerous mission, pretending to have a breathtaking love…without really falling?

Sometimes miracles happen not once, but twice…along a distant shore.
Karen Kingsbury, #1 New York Times bestselling novelist, is America’s favorite inspirational storyteller, with more than twenty-five million copies of her award-winning books in print. Her last dozen titles have topped bestseller lists and many of her novels are under development as major motion pictures. Her Baxter Family books were developed into a TV series. Karen is also an adjunct professor of writing at Liberty University. She and her husband, Donald, live in Tennessee near their children and grandchildren.
“A high stakes story of danger, love, and deep faith.”
— Woman's World

"A daring story of love and redemption."