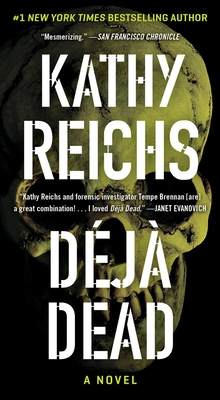 This is book number 1 in the A Temperance Brennan Novel series.

Her life is devoted to justice—even for those she never knew.

In the year since Temperance Brennan left behind a shaky marriage in North Carolina, work has often preempted her weekend plans to explore Québec. When a female corpse is discovered meticulously dismembered and stashed in trash bags, Temperance detects an alarming pattern—and she plunges into a harrowing search for a killer. But her investigation is about to place those closest to her—her best friend and her own daughter—in mortal danger…

“A genius at building suspense” (Daily News, New York), Kathy Reichs’s Temperance Brennan books are both “accomplished and chilling” (People) and “ripe with intricate settings and memorable characters” (Milwaukee Journal Sentinel).
Kathy Reichs’s first novel Déjà Dead, published in 1997, won the Ellis Award for Best First Novel and was an international bestseller. Cold, Cold Bones is Kathy’s twenty-first entry in her series featuring forensic anthropologist Temperance Brennan.  Kathy was also a producer of Fox Television’s longest running scripted drama, Bones, which was based on her work and her novels. One of very few forensic anthropologists certified by the American Board of Forensic Anthropology, Kathy divides her time between Charlotte, North Carolina, and Montreal, Québec. Visit her at KathyReichs.com or follow her on Twitter @KathyReichs.
“Great, suspenseful fun.”
—New York Newsday

“As good as Cornwell at her best.”
—Detroit Free Press

“What makes Deja Dead so compelling, in addition to the authoritative descriptions of how a forensic scientist 'reads' the story the bones tell, is the character of Brennan—smart, persistent, gutsy, ironic yet vulnerable.”
—Judy Stoffman, Toronto Star

“Kathy Reichs knows how to put all [of her] exotic experience into a novel.... Quebec's own Southern gal give[s] Cornwell a run for the money.”
—Margaret Cannon, Globe and Mail