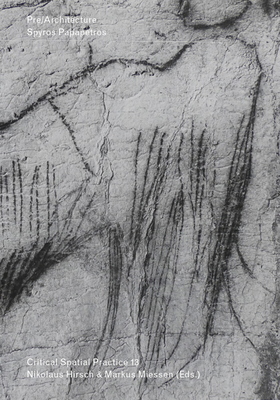 
Unavailable
Not Yet Published
On the study of prearchitecture that took place after WWII.

Can there ever be a world before architecture? Is there an arche--origin, beginning, or authority--that precedes the appearance of architectonics? This book argues that such a pre-architectural state became a central object of investigation by architectural historians and practicing architects in the aftermath of world historical events and major epistemological revolutions.

Confronted by the ravages of war and omens of modern architecture's own ending, architects like Frederick Kiesler tried to trace the origins of human design by exploring the foundational techniques of human and animal building through conversation with paleoanthropologists and evolutionary biologists of the first half of the twentieth-century. At the same time, historians like Sigfried Giedion attempted to reinterpret a number of recently discovered prehistoric monuments, if only to corroborate theoretical principles that were already in use by modernist art and architectural critics.

After WWII, the narrative of Prearchitecture moves progressively backwards to the middle of the nineteenth century when the term "prearchitectonic" was coined even before the institutional emergence of prehistory as a discipline of scientific research. Gottfried Semper wrote about the "prearchitectonic conditions" of peoples from eras preceding the historical civilizations of the Near East, expressed through smaller structures such as ceramics but not yet through monumental structures. For Semper, "prearchitectonic" elements described not a single temporal period but a general structural condition that survived the inventions of history and of architecture.

Ultimately, the study of prehistoric origins could uncover not only the causes of modernity's present crisis, but also the signs of architecture's futures past. By juxtaposing the fossils of prehistory with postwar cosmic anxieties and prognostications of a post-histoire, what is ultimately invented is a pre/post/erous history--a fictional prehistory of future architectonics. Pre-architecture is not simply "not architecture;" it is what architecture could have become but ultimately disavowed. The same unfulfilled potentialities haunt not only the distant past but also architecture's anxious present that periodically circles back to an aborted prehistory.
Spyros Papapetros is Associate Professor of History and Theory and a member of the Executive Committees of the Program in European Cultural Studies and the Program in Media and Modernity at Princeton University.