A little bit of Telluride for every season 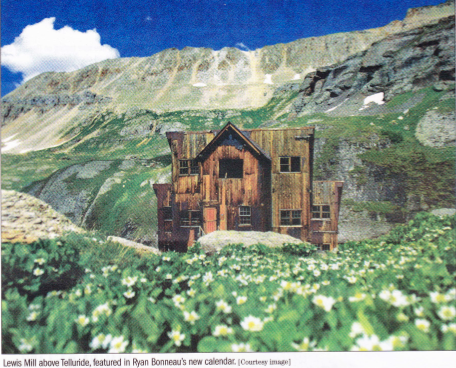 Published: Thursday, December 15, 2011 6:12 AM CST
Usually, fall in Telluride brings the release of two Telluride specific calendars. There is the TCAH desk calendar — a small stand-alone affair filled with images of the area created by local artists. And there is the Telluride Calendar, a full-sized wall calendar released by Telluride Publishing that features stunning photographs of the scenes that make this area so special.

The calendars are purchased each year by people who want to have a piece of Telluride on their wall or give a gift that reminds loved ones far away of the beauty of this place.

In a strange coincidence this season, however, both entities opted not to put out a calendar.

Daiva Chesonis, who co-owns Between the Covers bookstore, said the news came as a shock and meant a big void for her store, which usually sells out of Telluride Calendars each year.

“It’s just such a tradition for us to have it and sell it, and have people buy it to give it as gifts,” she said. By the time the store found out, employees had already taken orders from Chicago, Missouri and Wisconsin.

The void, was, well, avoided.

Ryan Bonneau, a local photographer who shoots for the Telluride Tourism Board and local publications like Telluride Magazine, stepped into the situation, and in a matter of days, put together his own 2012 calendar of the area, entitled Images of Telluride.

His calendar showcases all the many stages of a Telluride year — wildflowers and brilliant greenery of Bridal Veil Basin in August, the frozen, bruised-purple sky of a January morning, the flaming golds of September foliage.

The calendar just hit the shelf at Between the Covers, and is priced at $12.95 each. The store received about 600 copies; Chesonis expects them to.

Bonneau said he volunteered to build the calendar after hearing that the bookstore was in a bit of a bind. He didn’t have any experience building a calendar, but he had a vast archive of photos of the area he’s shot over the past few years as both a photo tour guide and a paid photographer.

After he agreed to make a calendar, he dove into his archive, discovering pretty quickly that while he had endless possibilities for high-season months like July and February, the options were fewer for stick-season months like April and November.

But with some input from friends and the ladies at the bookstore, he came up with a dozen lovely images of the area. He found his way through the design process, built the calendar, found a printer in California that could publish it quickly and sent off an order. All in a matter of about two days.

It was a little rushed, he said, but it was a good process.

“It was I think a great learning process because normally I’m on the other side of things,” he said.

He hoped that the calendars would arrive in time for Noel Night; instead they got here on Monday.

Most of the images were taken in the last year, and all at locations near town.

There is a stunner of Lewis Mill in Bridal Veil Basin surrounded by high-alpine wildflowers, a surreal shot of a technicolor sunset over Little Molas Lake in July, and a beautiful shot of a skier getting fresh tracks on a ridge in Upper Bear Creek. Elk graze on the Valley Floor as the mountains turn purple with the evening light and a hiker surveys an orange and green patchwork landscape from a perch on the Sneffels Highline trail.

Dividing a year in Telluride into four seasons wouldn’t do justice to the nuance that each month holds. Each has its distinct shades and behaviors. March with its wet spring snowstorms, June when the aspens explode in shades of lime, August with its canyon-shaking thunderstorms and October when the fall foliage and first snow meet in a vibrant clash of color. And that’s what Bonneau says is so exciting about behind a photographer around here.

“One of the things I love most about Telluride is that even in one season, things change so much on an almost weekly basis,” Bonneau said. “I really love it all.”

The ladies at Between the Covers are thrilled.