Bobbi T. Smith and Daiva Chesonis purchase Between the Covers

Published: Sunday, December 12, 2010 Daily Planet
Daiva Chesonis walks into the bookstore every morning, and then she starts talking to nothing.

“Hello, friends,” she tells the books lining the shelves of Between the Covers, whose spines stand at sharp attention.

It’s amazing the roofs of bookstores even stay on. That the ideas folded inside them on pages — Democracy and the Social Contract, say — and that history’s great characters — Odysseus and Jay Gatsby, to name a few — don’t shove that roof right off.

A bookstore is a bank of intellect, something every town, at least one that fancies itself a smart one, needs.

Between the Covers, a main-street bookstore for the last 36 years, has been that place, the fish food for hungry minds in a faraway town. It remains in good hands, as it always has been: Two long-time locals, Bobbi T. Smith and Daiva Chesonis, recently bought the beloved institution from the Brown family after the store — and the building — sat on the market since last spring.

The Browns agreed to hold on to the real estate because Smith and Chesonis couldn’t have made that work financially but parted with the store. The Browns had run Between the Covers for the past 12 years.

“I feel like I got an MBA in seven weeks,” Chesonis said of the process of buying the business. “The Browns were just wonderful to work with. I just can’t mention that enough. They were great,” Smith said.

Together, Chesonis and Smith bring 12 years of experience in books and 45 years in Telluride. Their faces are intertwined in the community and on the ski hill. Simply, the women are what makes Telluride so great: working, smiling, skiing, enjoying the valley, always.

Bookstores like this one — where the floors creak underneath your feet and old wooden ladders slip along the shelves — are slipping away in the era of Kindles and Amazon and Barnes & Nobles.

But not this one.

“It’s hard to swallow that physical books could go by the wayside, but I don’t believe that,” Chesonis said. “This community has proven to us year after year… they love to turn their heads sideways and look at the spines of books they’ve never seen before.

“At this point… a book, for a pretty fair price, can take people away from their problems. It’s affordable. It’s memorable. It’s re-giftable. It’s the best thing ever invented,” Chesonis said.

The store is putting a new website together that will, yes, allow readers to download e-books to their devices save Kindles, which work exclusively through Amazon. Customers will also be able to order books whenever, “In the middle of the night,” Chesonis said, after they’ve finished one book in a series.

Smith figured she liked having her job and wanted to make sure she kept it “so I can support my ski habit.”

So she went in on the purchase. “I could see the potential of doing this our way. And I really enjoy selling books to people, selling the right book to the right person,” she said.

And that much is true: when Smith sees someone walk into the store, she’s crafting a recommendation on what that person knows and likes. She’s a sort of book doctor and has, more than once, suggested a just-right salve. What’s more, she loves the very idea of books and the store that holds them.

“I love the old creaky floor,” Smith said. “I love the way the bookstore smells.”

For Chesonis, it’s a chance to own the work she loves and pass that along, maybe to her daughter or other employees.

“I have something to hand down. I’ve never had that before. And if it’s to another set of employees, all the better,” she said.

The store is heavy on the buy local movement. “At least give us the first shot,” Chesonis said. “You know, every time you click that ‘buy’ button, for anything, not just books, unless you’ve tried somewhere here first, it’s really bye-bye to that mom and pop shop.”

There is one goal that won’t be compromised, no matter how busy the store, and that’s to ski as much as they did before. “Bobbi lives to ski. And that was kind of part of the deal — that that doesn’t change. Part of the operating agreement is that we will not ski less,” Chesonis said.

On Monday, Dec. 20, the crew will hold a changing-hands party between the old owners and the new. It starts at 6 p.m.

“We’d love to see everybody just to kind of clink the glasses,” Chesonis said.

The bookstore’s espresso bar was also bought — separate from the store itself — by locals Jon Hubbard and Hilary Douglass. The Planet will feature that part of the store soon. 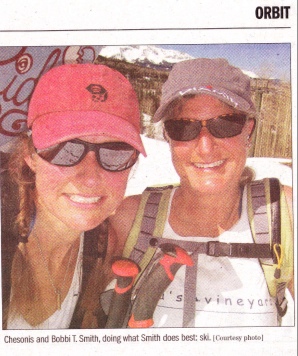